WRC pedigree barely disguised in a road going format. Lightweight, good power and low ratio gears ensured this took off like a stabbed rat! Very capable and the first Evo to look properly mean, another blank canvas for Skewer to get to work on.

I'd always liked the look of the Evo IV, it had the aggression that surpassed it predecessors but without the bolt on rear wheel arches of it's early successors - good clean compact lines and punch to back it up. Saw this example locally and needing a replacement for the S15 thought I'd take a look. The owner gave me a test flight and it gave a lot of bang for your buck, so a deal was done.

Servicing had been well taken care of so everything worked as it should. There were also some pleasant OEM mods in the shape of an Evo V engine, Evo VI TME wheels, Evo VIII ecu and Evo IX Brembo brakes. There was also a Blue Cat 3" exhaust system but essentially everything else was stock. The former owner was a smoker so the interior was rather tarnished and reeky, with the odd burn hole here and there, so it was going to start as an interior deep clean and retrim to make it a nice place to be.

So everything got stripped out of the interior, aside from the dash and carpet. Seats and doorcards went off for a retrim in black leather and deep grey alcantara while I set to cleaning the rest. Various panels and trims were easy enough, shampooing the carpet was bit trickier and cleaning the headlining was a fag. But everything looked, and smelled, so much better when it all went back together.

Decided to have a bash at some carbon fibre skinning, liked the idea of 'real' carbon overlays. Went for the centre console cubby lid and the door pockets on the front door cards. Turned out quite well, but a learning process also - larger sections with plenty of overlap (cubby lid) are relatively easy whereas skinny parts with little to no overlap and visible edges (door pockets) are a pain! Will certainly do more in the future though, with the layers of resin built up properly and smoothed and polished, it looks awesome and OEM quality.

Went with something a little more WRC inspired with this. The rally plates on the doors and bonnet are more obvious, and those in the know will spot the side stripe resembles the earlier Evo rally car's livery. To this I added plenty of Skewer specific stuff, plus a shout out to JDModified who did the servicing and updates when I had it, including the fitting of an Apexi Power FC ecu, which made it even more lively. It was kept relatively simple though, black main colour, red accent colour, with a less more type of overall design. Still turned heads, and not just because of the classic Evo burble.

Shiro ultimately suffered a similar fate to Quartz and I ended up having to sell due to a combinaton of increased outgoings and high running costs with a number of unavoidable long journeys at the time. Had Shiro stayed I would most likely have sorted a nice set of coilovers and was contemplating a six speed gearbox from the later MR marks. This was five years ago and personal circumstances have improved, so I may well find myself considering an Evo 8 or 9 MR variant in the not too distant future.

Wear it with pride 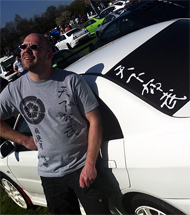 With Skewer NMB offering custom designed t-shirts you can either get the graphics for your motor to match the shirts, or we can do one off garments to match the vehicle graphics. Shiro and myself sporting the Nobunaga t-shirt graphics. See more in the online shop. 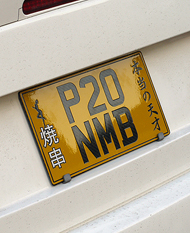 Shiro was one of the first to benefit from Skewer's carbon fibre number plates, and with personalised No Monkey Business registration to boot. Check out the carbon fibre section for more details and to get your own.