Toyota's fifth generation Celica GT-Four won the WRC championship from 1992 to 1994 in the hands of Carlos Sainz, Juha Kankkunen and Didier Auriol ending the dominance of the Lancia Delta Integrale. This limited edition homologation model is one of 5000 that needed to be built in order for the car to qualify to compete in the WRC.

I previously had a Gen 5 Celica GTi 16 which got written off in a rather scary accident in France on the CCUK 2003 European Tour. Having walked away from it I realised the car was solidly built and wanted another as a replacement. What better than the four wheel drive 2.0 litre turbo big brother GT-Four. When one of the limited edition RC models came up for sale at a small importers a handful of miles away I couldn't resist taking a look. I pretty much bought it there and then.

In hindsight, it appeared I'd been a bit too hasty in choosing this car, even though it had only just come in from Japan it gave the impression of having been stored in the sea! Turned out most of the underside was rotten, the first experience of this being a line from the gearbox oil cooler breaking and spraying oil over the exhaust, which created an alarming amount of smoke and I was lucky he didn't go up in flames. Trip one on the back of an AA truck. So, early work was restoration, replacing brake and fuel lines, cleaning up the under body, undersealing and so on, even the springs were corroded and needed replacing, so that little lot was replaced with Eibach springs and KYB shocks. A second hand Blitz NUR exhaust also made an appearance, and uprated pads and disks were needed. A set of Gen 7 Celica 17" wheels and the clear indicators off my old GTi were also added.

At this point I added the first set of graphics, a ghosted Castrol kit which was quite subtle despite covering the whole car. I also had some front splitters made up by a local fibre glass fabricator, and made a start on tidying things up in the engine bay. The J-Speed strut brace was difficult enough to get hold of back then, pretty much impossible now, and all this is such a far cry from where we are today.

In the quest for a bit more power we looked into an upgraded turbo, head work and a decent ecu. I hopped on a GReddy TD06 turbo kit group buy on the GT4OC, had head work done by the same guy who'd worked on my old Rover turbo very effectively, and managed to pick up a Motec M4 Pro from another GT4OC member. The turbo kit was fitted along with the ported and flowed head (including Piper high lift cams and 1mm oversized Ferrea exhaust valves), ported 9 bolt exhaust manifold, SARD 800cc injectors on a Wolfkatz fuel rail, Aeromotive adjustable FPR before being trailered up to Fensport for Adrian to fit and map the ecu. Early results were pleasant further up the rev range, but the turbo seemed to take an age to spool up - improvements would need to be sought at a later stage. A bit more tidying was done under the bonnet and some carbon fibre panels were made up which looked a bit more bling.

On the outside a new set of Inovit ST VI 18 inch wheels looked that bit better, and some H&R 25mm hubcentric bolt on spacers for the rear filled out the arches more pleasantly. I also switched the splitter graphics from orange to white, and a new Toyota Team Europe inspired number plate looked the part. Rally style black mudflaps also enhanced the visuals.

It was time to spruce up the interior. This started when I found some Cobra Daytona's going relatively cheaply in the GT4OC, but then getting hold of the specific runners from RHDJapan proved a little more costly. Worth it though, fit is spot on and allows the seat to be mounted relatively low compared to other after market options. Everything went off to a local retrim company who sorted the job in black leather and deep purple alcantara. The results were stunning! People had scoffed when I mentioned what the colour combo was going to be, but the key is not to overdo the colour, so the majority remained black.

Added to this were some Autostyle matts in black with purple piping and ali heel plates, a different Momo wheel (same horn push), a Pioneer head unit, GReddy Profec B Spec II boost controller and turbo timer and a couple of Defi Link gauges, boost and oil pressure, in a custom double a-pillar gauge holder. I also found a carbon fibre dash surround from the US and made up some dials to match the Defi gauges, including swinging the needles on the tacho and speedo to rest at the bottom. Nice.

Much like the underside originally, the main paintwork was somewhat past its best. While the graphics helped draw the eye away from the multiple shades of grey, it was never ideal. The choice was Aston Martin Meteorite Grey; a deeper, more metallic shade that I suspected would add a little more gravitas to proceedings. I wasn't disappointed. The new colour looked superb and made a dramatic contrast to the original finish.

So, after the respray, a new livery was obviously in order. I went for a more up to date Castrol design, based on the later Corolla WRC, and finished it in gemstone metalic black and red. The black didn't show up quite as well as hoped so it looked like another ghost design, not to worry, that could be changed later. Other mods then got a bit more serious; Hi-Spec big brake kit for the front, a bit more under bonnet bling, and the now fabled Neeltec quad pop-up headlight conversion with added HID goodness

Rufus was now looking sharp, but we still had the poor performance of the turbo to consider. Servicing and modification was now being done by JDModified and after some discussion we decided upon a Garrett GT3071R to do the job, this should give us reasonable spool and plenty of oomph, and also benefit from easy fitting thanks to the T3 turbine which matched that of the TD06. 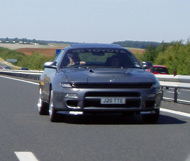 2006 Euro Tour saw a handful of us head down to St. Tropez for a week. Awesome driving in the south of France blasting through the tunnels of the Cote d'Azur checking out Cannes, Nice, Monaco and St. Remo. 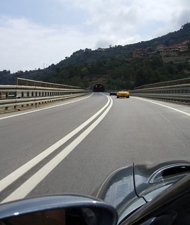 Rufus was the first to benefit from Skewer's carbon fibre charge cooler panels, with the No Monkey Business logo taking pride of place in the engine bay. Check out the carbon fibre section for more details and to get your own. 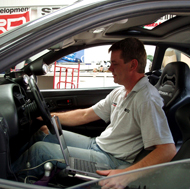 Adrian Smith at Fensport doing the job of mapping the Motec. I hadn't experienced on road mapping before, it was quite an experience! Came away with a nice big smile though. 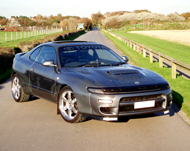 A nice arty shot of the old boy that managed to get into the CCUK calendar for 2007. Always appreciate the members voting him in, makes the hard work all the more worth it.