Classic S Body Loveliness. When the oppotunity arose I couldn't pass up the chance to snap up this sought after beauty, already possessed of a number of tasteful mods, and give it the Skewer treatment. For an all too short a time this was a real favourite.

Spotted this on Pistonheads when I was finally parting with my trusty old Rover 220 GSi turbo. Always like the S body cars, particulalry the S15 and with this being the Spec R, with the factory Aero kit, and in pearlescent white, I couldn't pass it up. With a selection of excellent pics like this, it made the decision that much easier. Finding the funds was a little less easy, but needs must! Some of the previous owner's for sale pics...

The car came withthe standard SR20-DET engine with VVT but being the Spec R also had the six speed manual box, which was lovely after a service with Motul Gear 300 oil, and the helical LSD which made it a bit more stable. The previous owner had fitted Tein coil overs, Cusco front strut brace, HID's, Work Emotion XD9 staggered offset wheels in white, and HKS exhaust, Apexi cold air box and filter, and a cutom lip rear spoiler, all of which were nicely done. The car itself was very clean with no rust and a good underside. Intended this one to be a keeper, so got started on the mods...

Can't beat a sweet bay so this was a focus. Replaced the Apexi aluminium airbox lid with a carbon one, Garage Defend carbon cooling panel, and a carbon spark plug cover. Treated the cam cover to a custom 'anodised blue' paint job, then added plenty of blue dress bolts and a blue engine torque damper. Kept everything else nice and clean and was pretty pleased with the overall look, what I like to call hyper OEM.

With a lovely clean white blank canvas Quartz was ripe for something special when it came to the vinyls. Decided on the large Skewer roundel logo for the doors, kanji version on one side and normal on the other, with the red and white in reflective vinyl. These to be surounded by some Japanese floral details in bronze, thin ribbon type flourishes in black and background bubble circles in glass etch. The aim to create a rear to front arrowhead overall shape to compliment the coupe lines of the car.

This was the first car I'd had with full adjustable coil overs, so the first job was to set it up to suit my driving style. In this case it meant raising it a little, knocking off some pre-load and softening it a touch, all of which made it more compliant on the road, which was where it was going to spend it life. I loved the wheels from day one but they were missing centre caps, so I made up some carbon fibre disks and applied the S lighting logo in reflective vinyl before sealing with lacquer. I wasn't so keen on the orange in the rear lights but having found out about Yashio Factory's smoked LED rear lights I had to get a set. They made such a dramatic difference to the back end. The original HKS exhaust was also a little too loud to live with, so I got hold of a Megan Racing M-OE muffler which we welded on in place of the original. This toned things down a bit but highlighted the deep rumble, and polished up a treat.

The interior received some attention as well, with more use of carbon amongst other things. Carbon fibre centre console surround was nice, and improved with a model specific Moonface Racing gear knob. These framed a Sony WX-7700MDX mini disk/CD head unit, otherwise known as the Wall-e head unit, which provided some rare extravagance. I made up a carbon panel with subtle graphic that sat on the rear parcel shelf, or rather 10mm above it allowing a belt of blue LEDs to be mounted underneath and wired into the sidelights. These gave a nice glow at night.

Unfortunately personal circumstances forced me into selling this beast which I only had for a couple of years. Had I kept it there would have been a full interior re-trim and then likely moved onto engine mods. I had also just purchased a number plate for it, S15 NMB, which I never got to see on it. I later heard from the guy who bought it off me that when he sold it on, the next owner drifted it and ended up writing it off. That hurt. However, more recently I did a quick search of the Govt. MOT check website and found it was recently put back on the road, so Quartz lives on somewhere, which is nice to know 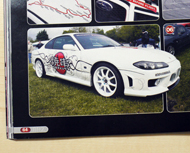 Quartz was proudly voted as HJC's Showcase car for Japfest '09 and so sat in the main display. This prominent position helped Quartz, and Skewer, get a mention in Banzai magazine's five page Japfest '09 feature

This bonus was hoped to be the springboard for a full magazine feature in the near future.

Hit With the Ladies 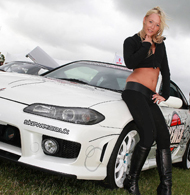 At the same Japfest '09 show Quartz drew the attention of the ladies. Bit gutted the one time I was away from the car was when they rolled by, but nice to know the effort was appreciated 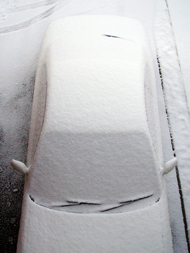 What's the best way to hide a white car? Under a layer of snow of course. Stealth mode engaged in the snow flurries of winter '09.