Carbon fibre offers that extra bit of class, that nod to the high tech racing world, that marks it out as something a bit special. First used to make up an engine bay panel, Skewer has been using carbon fibre sheet with custom designed graphics for a number of years now. What better way to celebrate that fact than to give it it's own unique identity of Phantom Works and let you know that when you buy Skewer's carbon products you're in a rather special club.

Skewer's carbon number plates help you stand out from the crowd. The graphic is laid over the carbon so the weave shows through, deep and dynamic. Standard and custom sizes can be made, different designs, text, logos and full on show plates. Can be made for other countries as well as the UK. All plates are sold as show plates but follow the visual regulations where required so can be driven every day on the road.

Engine bay panels started with a new charge cooler cover plate for Rufus, expanded into the other plates within the bay and now increasing the number of engine bay and angine panels that can be replaced.

Skewer's Project Rufus utilises a fair bit of carbon, with a number of panels in the engine bay, front and rear number plates, and soon a decorative panel in the boot. Check out more pics on the Project page.

You can just see it 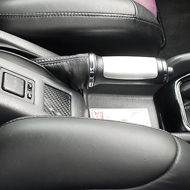 It might only be 5cm square, but it still counts - removed a button from Rufus's centre console and filled the gap will a micro carbon panel. Still needed measuring, cutting to size and applying. Just the job

Decorative parcel shelf panel in Quartz, this was mounted with a 10mm gap that hid a ring of LEDs that were wired into the sidelights giving a nice glow around the edge at night. Integrating lighting with your carbon really tops things off.